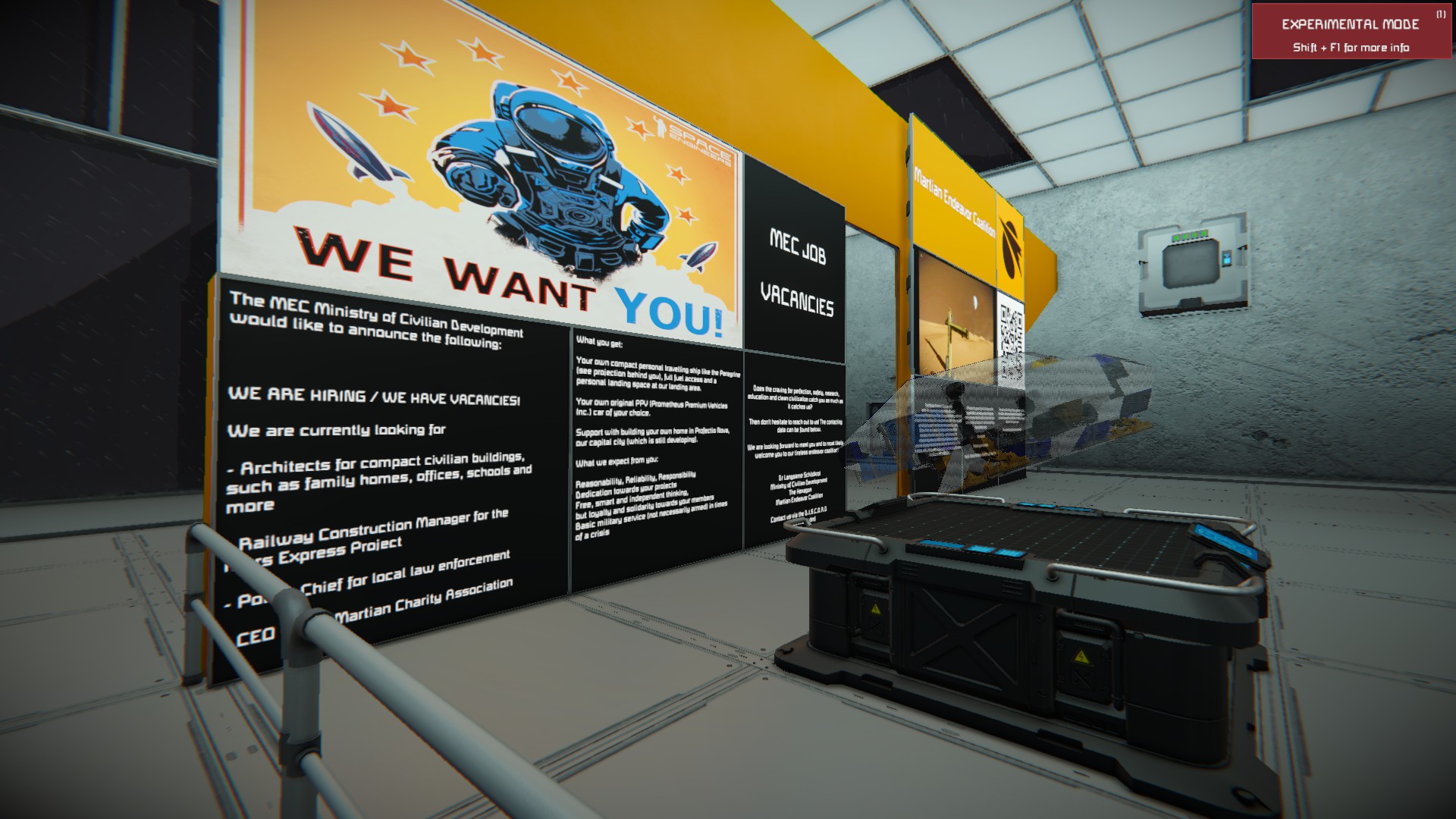 The Ministry for Civilian Development and Trade of the Martian Endeavor Coalition has given an official update on the progress of current civilian projects. MEC News have attended the press conference and summarized the most important information for you.

“We are proud to announce that our Endeavor Coalition keeps up with the goals we have set for ourselves, Martians can make a difference when working together and it is always great to see that every time there is a project again.”

Dr Langsame Schildkrot at the press conference on 2022-10-30

Those were the words the Minister of Civilian Development and Trade, Dr Langsame Schildkrot, on Sunday, 2022-10-30, when the update on the recent progress in civilian projects was given in an official press conference in the new governmental building, the Hexagon, which is waking up to meet its purpose as a central administrative element of the Martian Endeavor Coalition.
It was very clear that these words are not a lie, the Minister clearly made an honestly proud impression on that conference which reflects the overall martian pride, pride in the tireless efforts and teamwork going into the current projects which are aimed to stabilize the fresh civilization, pride in the progressive martian technology, pride in the good relations the Martians maintain with their friendship with the people in space and, recently increasing, their friendship with the Earthers.

Orchester Lake Railway on Earth
Ever since the now acting commander Rev has taken up his office as the leader of the Terran Society, things on Earth have drastically improved and the structures have become a lot more stable and reliable. Commander Rev is clearly determined to bring the chaos on Earth to an end, which worked out very well recently, despite Orks attacking the T.S main base repeatedly. That way the glorious Orchester City has finally given T.S a proper capital.
The Martian Endeavor Coalition started a large project to set up a railway connecting the MEC outpost with the T.S Main Base to facilitate future ware transfers for better and faster exchange of resources. This project was taken care of by the Square Table Member Commander J. Frearson, who fully commited himself to the construction of said railway, which resulted in the project being finished very soon after its beginning. As a great diplomatic sign of bilateral friendship that railway across Orchester Lake is being protected from Ork attacks by both T.S and MEC defensive structures, especially protecting the rover crossing bridge, a definite highlight of the railway which allows large rovers to cross the railway.

Profectio Nova and the Mars Express
But not only Earth has a railway now, also on Mars a project has been launched to set up a connection between the MEC main production facility, the future Air and Space Port and the future main station of Profectio Nova, the capital of Mars, which itself is an own large project itself, in this case with the main goal of passenger transport though, as Profectio Nova and the Hexagon airspace will become no fly zones in the future.
A few officially released images show the progress of both the railway construction and the city construction of Profectio Nova, you will find them in this post as well.
According to the Minister, the Martian Endeavor Coalition was more than lucky to be able to acquire the well known Star-Architect and scientist Lex as head of city planning, who is also formerly known under the nickname “Mad Lex”. He has a magical talent when it comes to the development of all kinds of civilian infrastructure.
Mr Lex has come up with numerous ideas to improve the overall quality of life and to implement the technological advances in every day life in the new city, says Langsame Schildkrot. And whilst the city still is a heavy construction site, one can definitely see where it is going in the future.

It is great to imagine how things will look like in the future – the Profectio Nova Air and Space Port being the gate to the Martian Capital, connected to the so far most important places on Mars by the Mars Express, which will use said planned railway, most likely at very high speeds.

However, the completion of the Mars Express Railway is not expected sooner than around the end of this year, as the planned high speeds of the future trains require high precision during the construction. But we shall better be safe than sorry.
To finalize the press conference, the Ministry of Civilian Development and Trade once again gave a statement regarding the recent changes in regulations for new members.

“Whoever is amazed by nice projects being completed as a team effort, who is reliable, reasonable and able to take responsibilities, no matter the experience, is welcome at the Martian Endeavor Coalition.”

Dr Langsame Schildkrot at the press conference on 2022-10-30

Every member who contributes to this project will be provided with an own personal travelling ship of a certain size approximately matching the Peregrine in the first image of this post, an own house in our capital and an own company car. And beyond that of course will have the possibility to work on advanced and glorious projects and getting a career with plenty of options.

We will always stand together and keep working on great things to go towards a bright, healthy and wealthy future, and whoever likes that idea will be welcome to join.

No comments to show.
© 2022 Dimidium Roleplay. Created for free using WordPress and Colibri
We use cookies on our website to give you the most relevant experience by remembering your preferences and repeat visits. By clicking “Accept All”, you consent to the use of ALL the cookies. However, you may visit "Cookie Settings" to provide a controlled consent.
Cookie SettingsAccept All
Manage consent